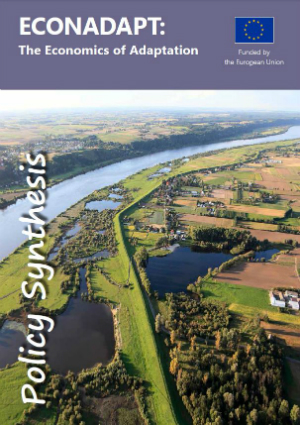 The ECONADAPT project, on the Economics of Adaptation, is a research project funded by the European Union Seventh Framework Programme (FP7) for research, technological development and demonstration under grant agreement no 603906. The project has been undertaken by a pan-European consortium, led by the University of Bath.

The objectives are to build the knowledge base on the economics of adaptation to climate change and to convert this into practical information for decision makers, to help support adaptation planning. The project has had a strong element of stakeholder engagement and co-production and has organised the research around two questions / work streams:

• What are the key methodological advances needed to improve the economic assessment of adaptation?
• What are the big adaptation decisions facing Europe in the next decade where these improved economic methods could be applied?

The ECONADAPT project has developed a policy led approach to frame the research and policy analysis. This focuses on the practical application of adaptation economics to near-term adaptation decisions for both the short- and the longer-term, using iterative risk management and prioritising low-regret options.

The project has collated the knowledge base on the costs and benefits of adaptation. This evidence has evolved significantly in recent years, with a greater coverage of risks, sectors and countries, though important gaps remain in many areas. More recent studies show the importance of considering uncertainty, as well as policy implementation costs.

The project has made methodological advances in a range of areas. It has developed adaptation economic methods for assessing adaptive capacity, undertaken primary survey work to understand public preferences for adaptation, and developed methods for the scaling, transfer and aggregation of cost and benefit values. The project has also applied decision making under uncertainty to adaptation economics, reviewing and producing summary information on methods, and undertaking example applications.

The ECONADAPT project has applied these methodological advances to a series of policy domains, considering the major priorities for adaptation economics over the next decade.

It has considered the bottom-up costs and benefits of addressing the increased frequency of weather related disasters from climate change, and complemented this with analysis of the fiscal consequences of climate change exacerbating current national level disasters.

It has developed guidance for economic project appraisal and undertaken practical case studies that consider river flooding and sea-level rise.

It has also developed guidance for policy appraisal (impact assessment), looking at the development of mainstreaming with a case study in the agriculture sector. A key priority in both the project and policy appraisal studies has been to include decision making under uncertainty.

The project has looked at the wider economic effects of both market-driven and planned adaptation, undertaking macro-economic modelling to assess the economic consequences of adaptation from a top-down perspective.

It has also developed the project and policy appraisal frameworks for application in the developing country context, particularly in relation to international climate finance, and undertaken a series of practical case studies to demonstrate the application.

The project concluded in October 2016.  It has been co-ordinated by Dr Alistair Hunt at the University of Bath.